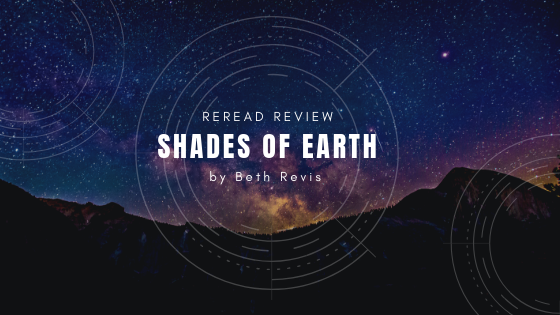 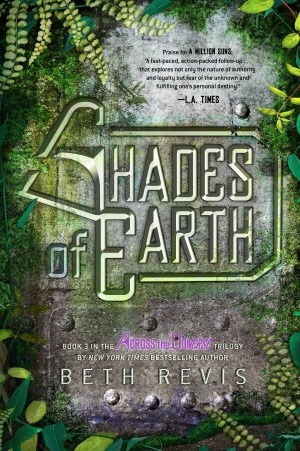 Where do I begin with my reread review of Shades of Earth by Beth Revis? I could start by ranting about how much I hate the repackaged cover (I mean, look at it!) or I could start off with how much I’d forgotten about the events of this book. Of the three, I remembered the absolute least about this one. I remembered the ending, but only vaguely, so rereading this one was almost like reading fresh again, which is honestly a great experience when rereading a book with as many twists and turns as this one.

Shades of Earth picks up right where A Million Suns left off. The emergency shuttle is loaded and ready to go, and Amy, Elder, and the residents of Godspeed (hereby referred to as “Shipborns”) begin the landing sequence for Centauri-Earth. After arriving, the “Earthborns” wake up and jump into action, with Amy’s father’s father taking control of the new colony. As expected, there are new dangers everywhere on the planet, but also some new (and old) mysteries to investigate as well.

Initially, I had forgotten if Shades of Earth had the mystery elements that I had come to love in this series. Well, rest assured, it does. While it’s not dripping in mystery and clues like A Million Suns, there’s definitely enough twists, turns, and murders to keep you flipping pages. I read the entire book in a day because I couldn’t put it down. Once again, I had a bit of an issue with the author’s use of a big grand reveal at the climax of the story. It was in the other two, and I can sort of see it in her newer duology series too, where the culprit is usually someone you didn’t initially expect and they essentially tell our protagonist the who, what, when, and where while twiddling their mustache. Considering that there was a 7-year gap between the releases of this series and that duology, I’ll just chalk it up to her writing style. I can’t say that I didn’t enjoy it, but I wish that there were more clues and more for the reader to discover along with the characters.

I think my main issue with this one, aside from the grand reveal at the end, was the pacing. Understandably, a lot is going on as our colonists are struggling to survive on a planet of hostile alien creatures. There’s a fair amount of world building needed here, more so than the other two novels. I feel like the major events of the story were all back-loaded into the ending, and I wish that there had been more of a falling action after the last scene. A lot of the major explanations and action-packed events all happened within the last 30% or so, and I just wish that they were a bit more stretched out because things felt confusing toward the end.

Another issue I had was the romance in it. Amy and Elder get closer than ever, but there’s also another character who twists everything into a bit of a love triangle. Like most of the romance in the series, it’s subtle and overshadowed by literally everything else going on, but I wasn’t the biggest fan.

The last big issue I had was in how the characters acted in this book. While yes, tensions are high given everything that’s going on, Amy sometimes acted a bit immature, and Elder’s jealousy was a bit much at times. I also didn’t like Amy’s father much, as he was very much a stereotypical military figure, just as how her mother was a stereotypical scientist. After having the entire series build up to them waking up, they ended up as flat characters, unfortunately.

All-in-all, I think that Shades of Earth was a nice and exciting conclusion to this trilogy, but it could have been a bit better. The twists were perfect and unexpected, and the worldbuilding of this new planet was fantastic! I just wish that the reveal of the mystery and the characters had been written better, as that might have aided in the discovery of clues. I’m rating it 4/5 stars because I feel like it wasn’t as strong as A Million Suns.

Use my code STARUNPLUG10 for 10% off your 3,6, or 12-month subscription for Unplugged Book Box

Try out Grammarly via my affiliate link!